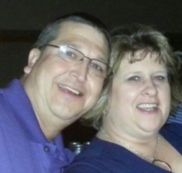 Mark Teague, age 52, of Aurora, Missouri passed away at 10:23AM on Wednesday, December 27, 2017, at his home surrounded by his family.  He was born July 24, 1965 in Aurora, the son of Carlos and Wilma (Barnes) Teague.
Mark was employed by Silver Dollar City as an Attraction Lead for the past three years.  Prior to that, he was employed by Service Vending for 22 years.  Mark enjoyed fishing, camping, golfing, and spending time with his family and friends.
On April 29, 1985 he married the love of his life, Amy Miller.
Mark is survived by his wife of 32 years, Amy of the home, one son Jake of Springfield, one brother Alan of Olive Branch, MS, two sisters, Brenda (Bill) Tougaw and Linda Phelps of Fulton, MO. His mother and father-in-law, Jim and Penny Miller of Aurora. Three sisters-in-law, Eden (David) Ward of Carl Junction, MO, Kimmy (Bill) Timmsen, and Missy (Scott) Welch all of Aurora, Mo and several nieces and nephews.
His parents, Carlos and Wilma, and his sister, Sue, preceded him in death.
A funeral service under the care of Peterson Funeral Chapel of Aurora, will be held at Elm Branch Church in Aurora on Saturday, December 30 at 2:00 PM.  Visitation will be from 6:00-8:00 PM on Friday, December 29 at the church.
In lieu of flowers donations can be made to the Mark Teague Memorial Fund at First Independent Bank to help with medical and funeral expenses.