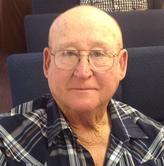 On September 14, 1962 he was united in marriage to Donna Faye Mahurin.

He was preceded in death by his parents; one sister, Rosezetta M. Massengill and one brother, S. Paul Hood.

Jim was drafted into the Army on January 17, 1967 and came home June 21, 1968.  He saw many battles and lost many friends in that year.  When he came home he said he told God "If you get me home I promise I will work and provide for my family."  He did just that.  He was in the trucking business until 2016 when we sold our last truck.  That was the first time he had not had a truck since 1978 when he bought his first one.  Jim always told me that hard work never hurt you.  This summer as sick as he was he would tell me, "you help me get on my mower and I will help you cut grass."  He would take his walker to the garage then get on his mower.  He would tell people that our place belonged to God and we were just taking care of it for him.  He wanted it to look nice.  Jim had a big heart and always wanted to help others.

​          Funeral services will be held Saturday, December 30 at 10:00 a.m. in the Peterson Funeral Chapel.  Burial will follow in the Marionville IOOF Cemetery with full military honors.

Visitation will be held Friday from 6-8 p.m. in the funeral home.