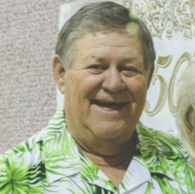 Harv is survived by his wife, Gloria; children, Kirk and wife Karrie, and Valerie; three granddaughters, Austin, Addy and Campbell; and two sisters, Beverly and Vivian.

He was preceded in death by his parents, Pete and Pat Welch.

Born February 13, 1945 in Monett, MO.  He attended a one room school house (Elm Branch) up to the eighth grade graduating high school from Aurora, MO. in 1963.  Harv went on to play  football and baseball and graduating with a bachelor's degree.  From there, along side his young family he began his career and passion.  Starting his coaching career 1970 in Southwest, MO. and finishing up his football career in 2015 with over 200 wins under his belt, including induction into the Lebanon Hall of Fame and Missouri Football Coaches Association Hall of Fame.  He was known for his 'old school' ways of coaching and teaching.  Coach Welch made a lasting impression and touched thousands of young lives over the years through tough love, structure and love for the game.

Funeral services will be held Saturday, August 26 at 10:00 a.m. in the Elm Branch Christian Church under the care of Peterson Funeral Chapel.

Visitation will be held Saturday from 9:00 a.m. until service time in the church.